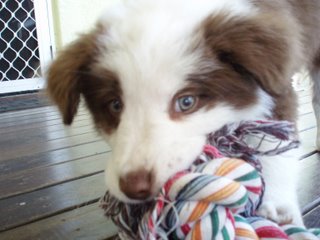 What a big day for a little dog!! Jester had a good night's sleep with no crying (not that we heard) and was up early to greet us at the door this morning. I think he has finally mastered the stairs, although he still hesitates going down. He had a bath, in a bucket, in the laundry sink and seemed to enjoy it. (Nikita also had a bath today, although her's was not as enjoyable for either of us). He started to get the shakes after a while and was soon dried off and back to his fluffy self! 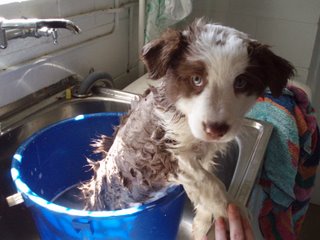 A found a hole dug in the garden today!!! Jester has been told NO!! so i hope he doesn't do any more. He was chewing my runners yesterday, got told NO! and he hasn't touched them today....maybe he is a fast learner!!!! GREAT!!!!

We also went and visited the neighbours today. S and C though he was very cute, although S (9 years old) was scared that he would nip her. She gave him a tennis ball to take home with him. He loves to chase it and will sometimes bring it back to you although he won't drop it. You have to wrestle it off him! Boy are his little teeth like little razors!

After visitng the neighbours Jester decided to let himself out.....he managed to crawl under the fence. So we have put some cardboard up until he gets to big to fit under. Nikita won't like it as it also stops her escape route!

Did some shopping today and N visited. She might have to move back in when her lease runs out in 3 months. Will have to wait and see what happens....nothing else really exciting happened today did a little house work and A has let the washing pile up while I was away for two nights. I have done some of it but still need to hang out and fold.....off to do that now.....have a good evening!


Had to come back to add that A went to his first game of touch tonight. Hope he enjoys all the socialising while I'm at home.....supposedly working !!! ;)

Popular posts from this blog 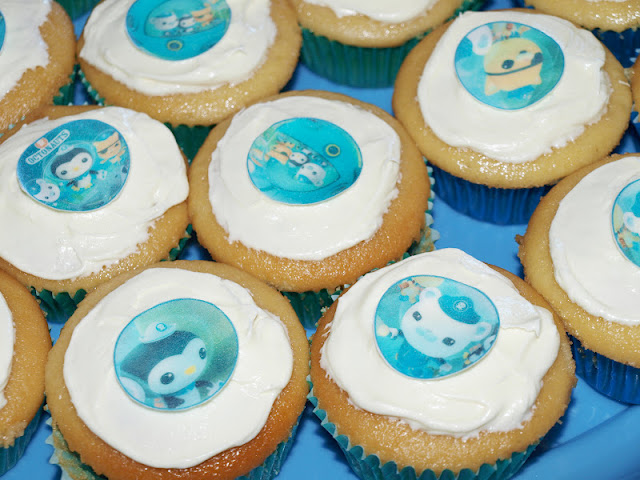 It has been a week two weeks since Aden's Octonauts party and I think I have recovered enough to post about it. Special thanks to my sister for gabbing my camera and my MIL and SIL for their cameras, as I didn't take any all day!

Aden is a massive Octonauts fan! So when he didn't go for my initial plan of a 'Monsters' Party ( too scary Mummy!) we decided on Octonauts.

I did a lot of Internet searching and looking at a lot of Pintrest posts to gather all my ideas together.﻿﻿
There was lots of party food including Octonaut Cupcakes.
And a Kwazii cake as requested by the birthday boy!

We also had yellow/green/blue jelly cups with turtles in them and smarties cookies. As well as regular party food and hot finger food for the adults.


We had balloons, a birthday banner and streamers.

The oldest child at the party was 4 so there was no one to show them what to do with party games, so we had lots of outside toys and I made some play dough, which all the kids had fun wit…
Read more 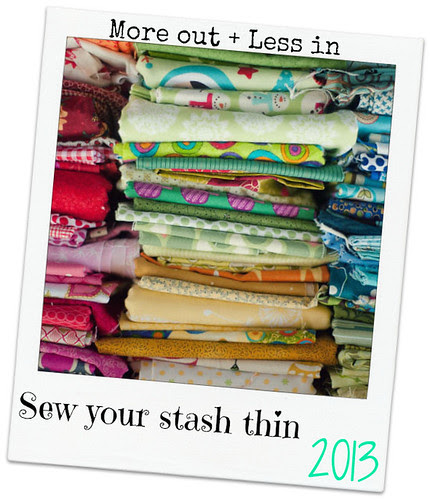 It seems that there are a few stashes out there that are out of control....mine included! So after a chat with some online quilting/sewing ladies I've decided to host a stash busting effort for 2013.

The aim is that you make something (and finish it WIP's don't count!) out of you stash and that the out going fabrics are more than the incoming 'must have' fabrics.

I just can't put a ban on fabric buying....what if the BEST fabric ever is released this year and I miss out! So this will hopefully keep a lid on it!

To help keep track of that fact that your stash is shrinking I'm going to suggest that your count in Fat Quarters.

Backing and binding for quilts is easy to calculate.
Quilt tops can be more difficult. You can use the pattern requirements, if you use a pattern, to help work it out, or measure what is left of the fabric yardage/FQ's that you used, or you might like to weigh your finished top and use that weight of it to guesstimate how many FQ&…
Read more

Okay so technically I made this last month to send to a sweet new babe with his quilt. But I haven't blogged it yet so it counts for this month right? Aden saw this sweet little dino on my Pinterest board and asked if he could make one. It is child-friendly-ish but at 4 he is not ready to make things on the machine on his own! The fabric and ribbons were all his choices though!

Mummy did the tricky sewing and Aden was able to help with some of the stuffing...truth be told he just liked sword fighting with the knitting needle!

﻿ Little dino has been on Kindy visits and sleepovers. A big hit with my dinosaur loving boy! You can see the ribbons are a bit closer together and a little smaller for the gift version I sent.